By Neil Young.  Here is one of his songs to play while reading on if you choose.

I’ve never known very much about Neil, and have always had the idea that not many other people do either, and that he’s wanted it that way.  So now he’s written this memoir; clearly his own words, and on his own terms; not according to any formula.  If you want a straight chronological story, this book may drive you crazy.  I didn’t mind it a bit.  He used a stream-of-consciousness writing style, where he mostly compartmentalized stories into short chapters, but jumped from then to now and back, and to future goals, with the change of a short chapter or sometimes only a paragraph break.

He wrote about his goals for his Pure Tone/Pono listening technology.  I’m dying to experience it.  My years of running with ear buds has given me some tinnitus that may impact the experience, but I still want to hear the sound he is describing.

He wrote about his cars and his love for cars.  I remember when his Lincvolt was a project being constructed near my home, which was very cool.  But sadly, he doesn’t have positive things to say about that part of the project.

He wrote a lot about his bands Crazy Horse, Buffalo Springfield, Crosby Stills Nash & Young, and his earliest days as a musician.  He wrote about bandmates, managers and producers.  He described writing several of his most well-known songs, and sometimes provided back stories to them.  He wrote about living and creating music in Laurel Canyon.  He included a photo of the Laurel Canyon cabin he lived in when he wrote “Expecting to Fly.”  That is the song of his that touches me the most.

My biggest and maybe my only beef…is with the book’s front cover photo.  But first, about the back cover photo:  It is real, and wonderful, and by Linda McCartney.  His eyes, expression and features are captivating.  When I think of Neil Young, that is the way I’ve always seen him in my mind.  Then there is the cover photo; taken recently, head looking down, and partially shielded with a hat; no eyes showing at all, let alone eye contact, and then there is a prop; a card tucked into the hat band, that says, “Hippie Dream.”  A little too contrived for me.  No, make that way too contrived.  Unless I missed the point, or the back story, which is certainly possible.

The book is almost 500 pages long.  I enjoyed it from start to finish. 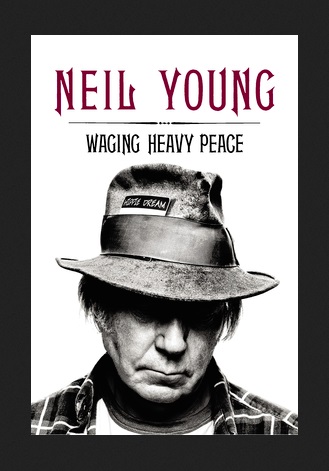 Thanks very much to my runner friend and fellow CSNY fan, Gary, for passing the book along to me.  I’m passing it on to my twentysomething-musician-nephew, who didn’t realize Neil was the ‘Young’ in CSNY.  He’s very much looking forward to the read.

And the incredibly beautiful “Expecting to Fly.”

Yesterday’s run was short and meant to cover the Janathon requirement but not damage my tender ankle.   I went out after dark, wearing my reflector vest.  There was a bitter cold wind, and it was snowing those mean little dry flakes that don’t accumulate but swirl around in the streets and parking lots.  Windchill was 5F/-15C.  Ankle did okay, but was a little stiff and tender.  I think it will be mostly back to normal in another day or so.