This is the knitting pattern.  It’s a free download from Lionbrand.  Link: http://www.lionbrand.com/knitting-pattern-sideways-cable-pullover-1.html

The pattern calls for Vanna’s Choice yarn, which comes in a lot of colors, is economically priced, and easy to find in the required quantities.

The first time I made the pattern, I stuck to the script, using the prescribed yarn and sizing for the cropped waist-length style.  The yarn color was called ‘Goldfish’ (not offered now).  I think it’s a great Autumn color.  The only variation I made was adding the thin pink tips for interest.  I really enjoyed making the sweater.  It has traveled well.  I have loved wearing it; usually paired with black jeans and boots.  The big fold-over neck is a built-in muffler under a coat in cold weather.

Its latest wearing was this past week, to a local art gallery where Cartoonist-to-The-Beatles, Ron Campbell was appearing and exhibiting his works.  This was a no-photos event, so I can only show you what he has published on line.  You can check out his webpage, and this very cool 11-second time-lapse video.

I wish I’d had more advance notice; to plan, shop and decide on one of his prints.  The prices were enough that I’d want to plan ahead rather than purchasing on impulse.  Watching these videos, I badly want another chance to shop his prints.

The second making of this pattern came when I fell in love with a skein of vibrant teal Red Heart Soft yarn in the bin at Joann’s.  The store only had the one skein in that color, but the label said ‘no dye lot’, so all I had to do was wait for the stock to be replenished, right?  Wrong!  When more of the color came in, it had a noticeably greener cast.  Drat.  I had already knitted an entire sleeve with the ‘good’ color skein. 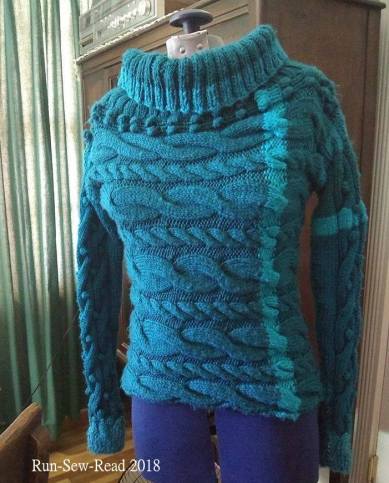 I knitted on, incorporating two other yarns as stripes to keep the different teal colors separated.  One of the yarns is reflective.  I also added two additional cables to the bottom for a less-cropped shape.  I was disappointed even as I continued to knit, because I had initially envisioned a solid colored sweater in that gorgeous teal color of the first skein.  I wasn’t sure I wanted a striped version.

It became a UFO (unfinished object).  When the pieces were all knitted, I left them sitting in a pile for the rest of the winter.  Then, late last Spring, I finally picked them back up and decided it was worth seaming them together to at least see how the sweater would look.  The result was a surprise.  I loved it.  But with warm weather on the doorstep, the sweater was boxed up after just one test-wearing.

Fast forward to this Fall, and the newly-finished teal sweater with reflective bits finally got its first full outing–to a concert.  Lindsey Buckingham brought his solo show to our area.  He was witty and had great stories.  His live music was exceptionally good.  His energy never waned.  Neither did the crowd’s, because who can sit still when you’ve got visions of the Family Truckster careening down a Kansas road? 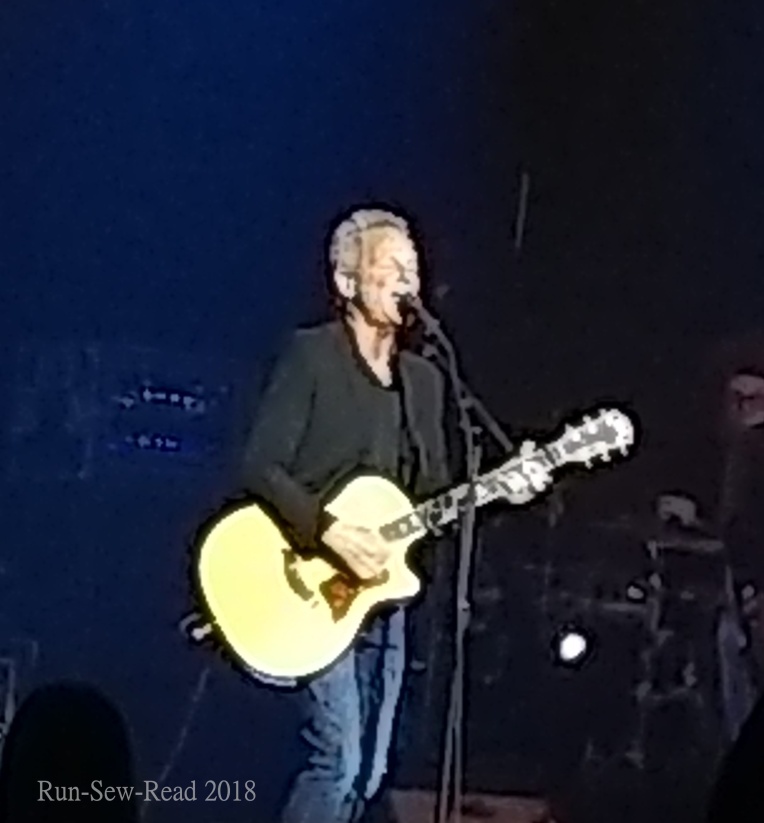 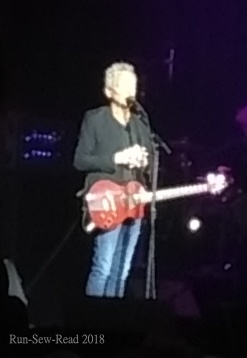 His band is really superb.

Wrap-up of the sweater projects:

[When he gets to the last minute or so of Never Going Back Again, I wonder how the Mac ever decided it was a good idea to part ways with this performer.]

A surprise fave from the concert was I Must Go.

He never actually said the name of his former band, but he closed his encore with an inspired version of Treason.

Lindsey’s got a new album coming out early next year, with more touring planned.