I’m a fan because this was the view from my front yard as a kid.  That wall at the end of our block is the university’s football stadium.  If I didn’t attend the game, I could still hear the roar of the crowd when a touchdown was scored.  My parents turned our yard into a pay parking lot for extra income on game days.  Growing up here, I always knew I’d be athletic.  The inspiration to be athletic has led to a lifetime of fitness; all a gift from living on this street.  Every year, the autumn colors and the rustle of leaves on the sidewalk take me back to this street. 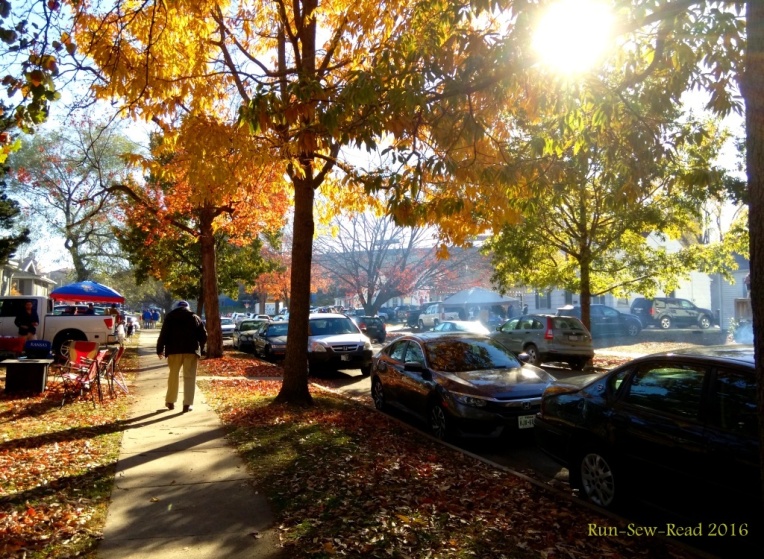 Back then, a kid’s season football ticket was $6, which worked out to $1 per game.  I’ve been to a lot of games there.

Still, this week’s game was special.  It was the second win this season, after a winless season last year, under the new coach.  He’s the right guy, as is shown by the methodical way he is developing a talented, respectable team of future stars.  This was his first conference win, which he and the team accomplished with a most exciting overtime ‘walk off’ field goal.  (Do they say ‘walk off’ in football?  They need to for this game.)

At the winning moment, the fans rushed the field and swarmed the players and coach; an emotional ESPN interview with the coach took place among the ecstatic crowd; and then a goalpost came down and was carried up the hill to the university’s lake.

The crowd for the game was pitiful in size.  True it was a chilly day.  But not that chilly.  This picture is just plain embarrassing.

Our defense was a force the entire game.  The offense came through to keep us in the game, and when we most needed it at the end of the game.

Our kicker hit a field goal to tie the game with seconds to go.

In overtime, an interception right away set us up to win the game with another field goal.  The winning field goal triggered the roar of the crowd, and an emotional rush onto the field to embrace the team and coaches.  All captured here, thanks to the phone in my shivering, excited, mitten-covered hands.

Next year I predict even more wins.

2 thoughts on “A conference win! And why I’m a home town college athletics fan.”