I made an executive decision last week, to ban low-rise jeans from my person.  I despise the old low-rise trend; can’t stand wearing them.  They never feel right.

The pair of low-rise skinny jeans that caused this epiphany, still has some wear in them, and I like the color and weight.  When I endured the misery yet again of wearing them last week, I resolved to either fix the waist or be content to ruin them trying. 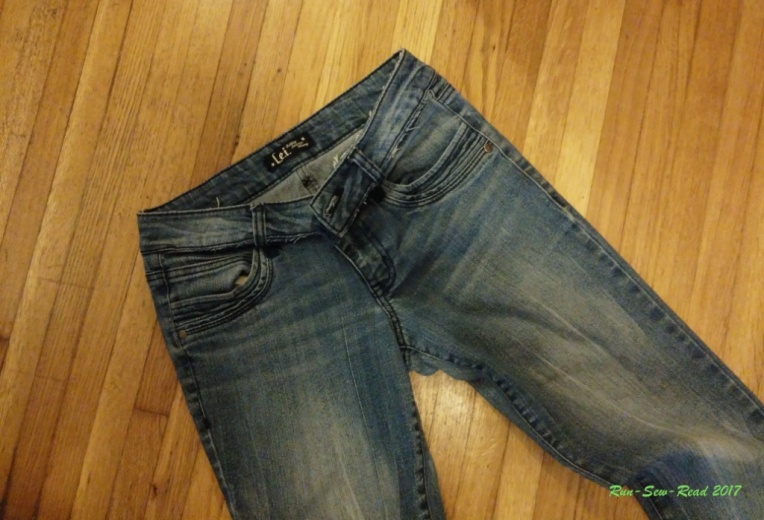 Here’s how the process went: 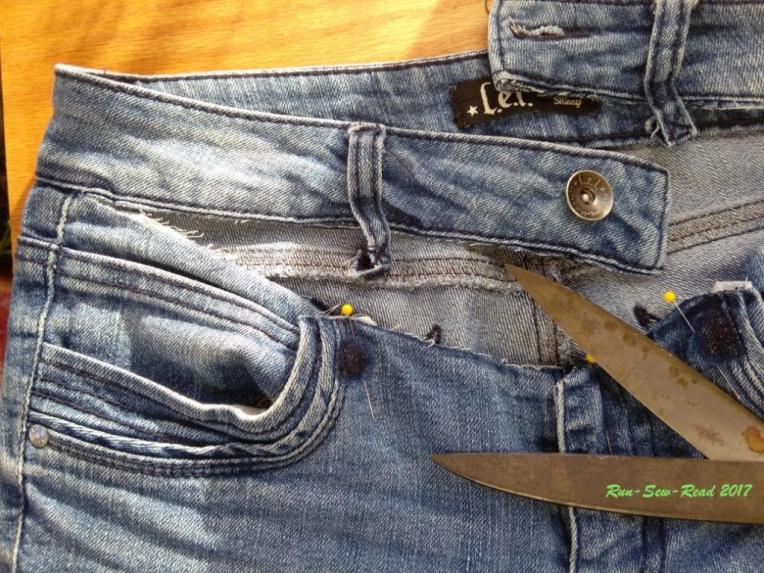 Pin the pockets and zipper to hold them in place. 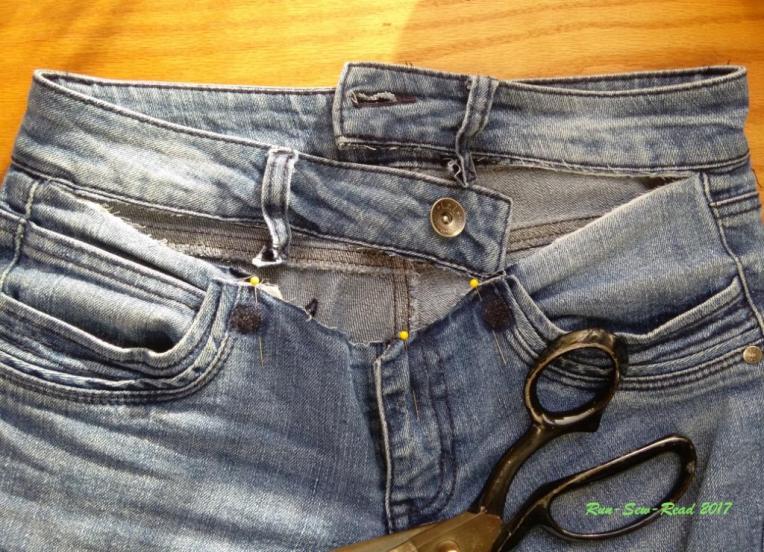 Put the jeans on and identify where the waistband naturally feels right. 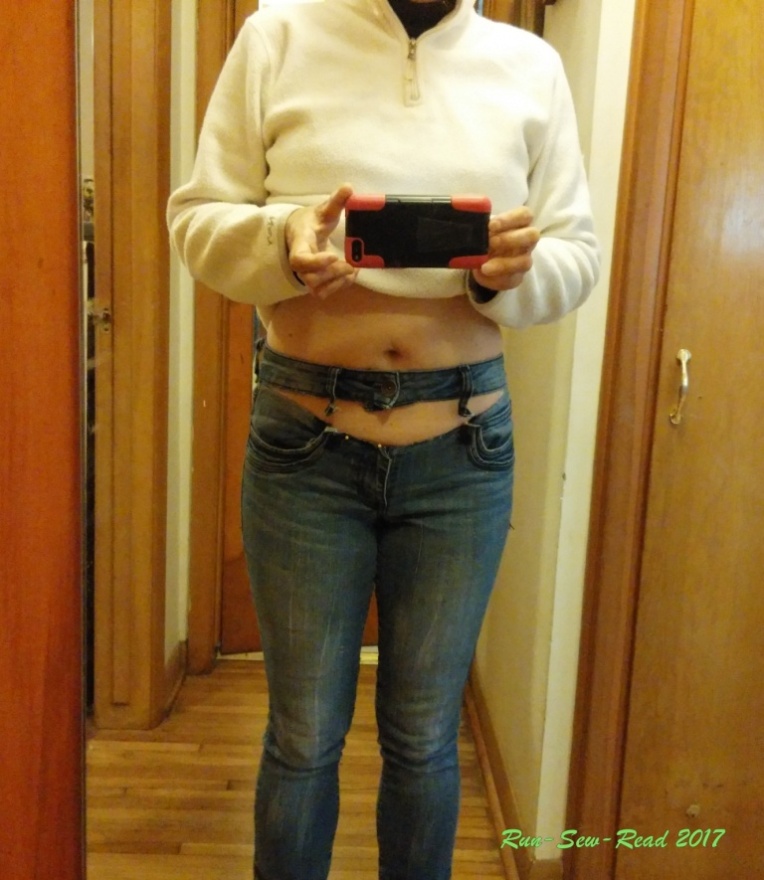 Cut two pieces of denim to insert in the open space across the front.  The pieces should be roughly the same shape as the open space, but slightly larger than the space on all sides. 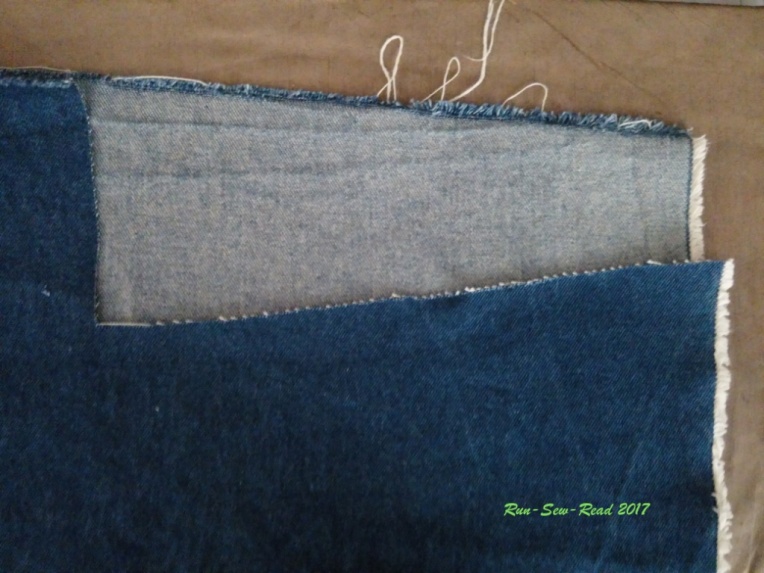 With the waistband moved out of the way, sew each insert piece to the body of the jeans, right sides together. 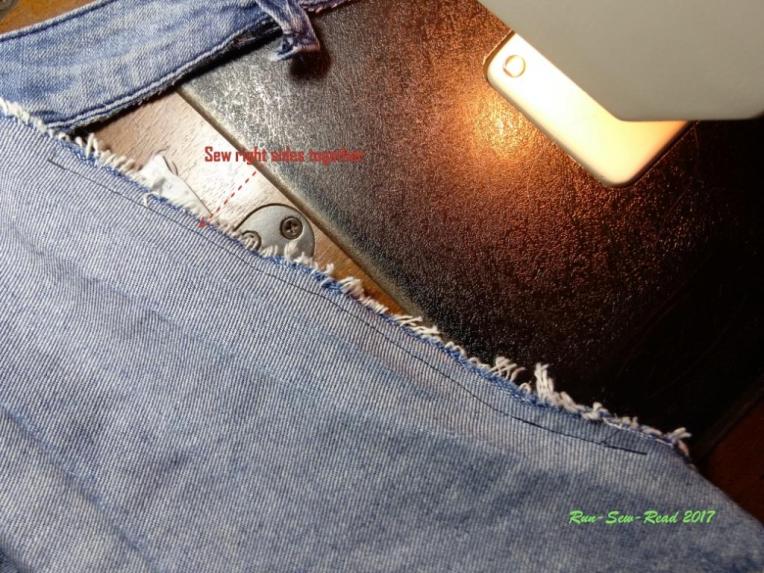 Flip the insert piece over, and the seam looks like this. 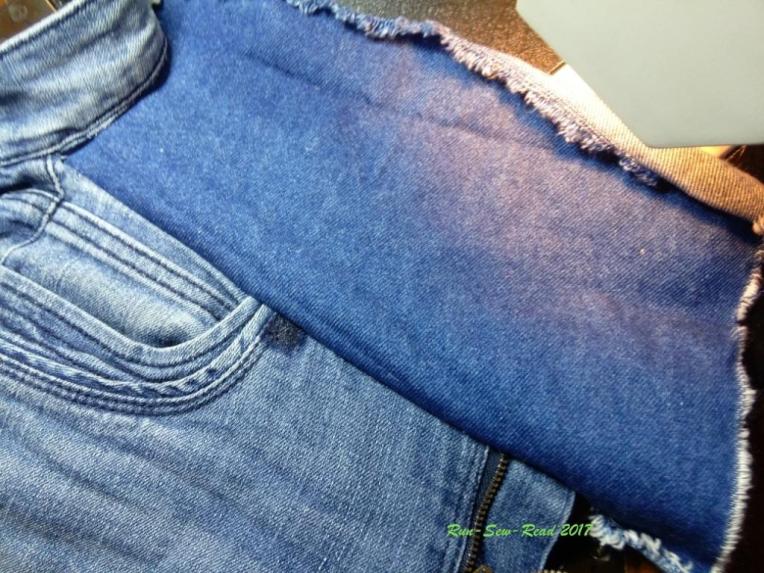 Topstitch the waistband onto the insert fabric.  (Make sure the belt loops are out of the way of the stitching) 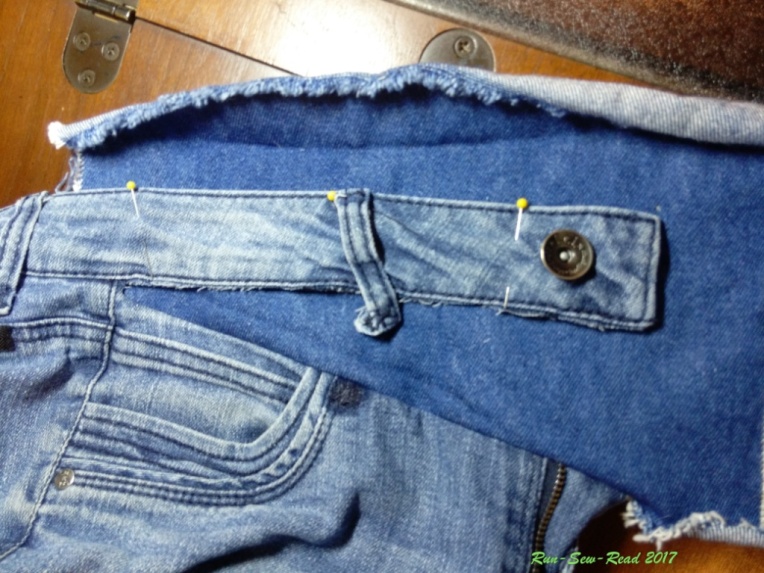 Trim the insert fabric even with the top of the waistband.  Fold the center front excess to the inside and topstitch in place.  Inside out, the insert will look like this:

You will need something to close the gap where the zipper is too short.  I used velcro.  It was easy to place and stitch, and holds the gap closed.  I first added the long velcro shown next to the zipper.  That wasn’t effective.  The short piece above the zipper worked, and was actually easier to put on. 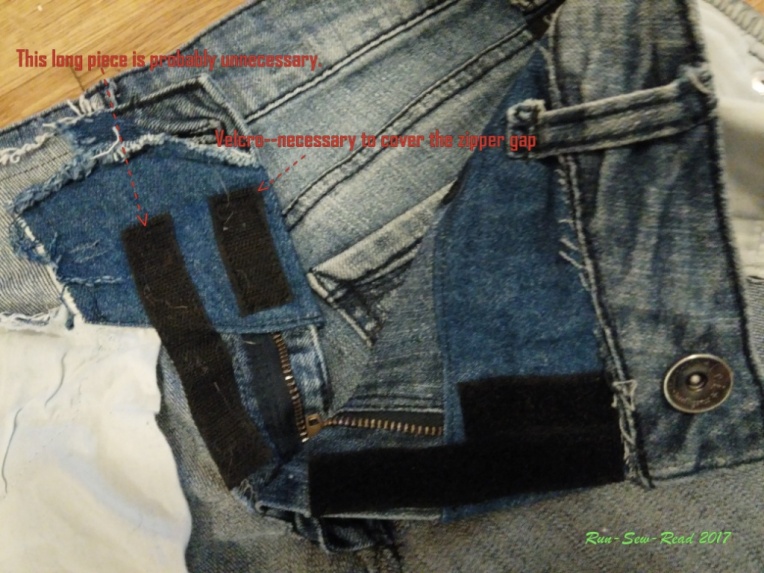 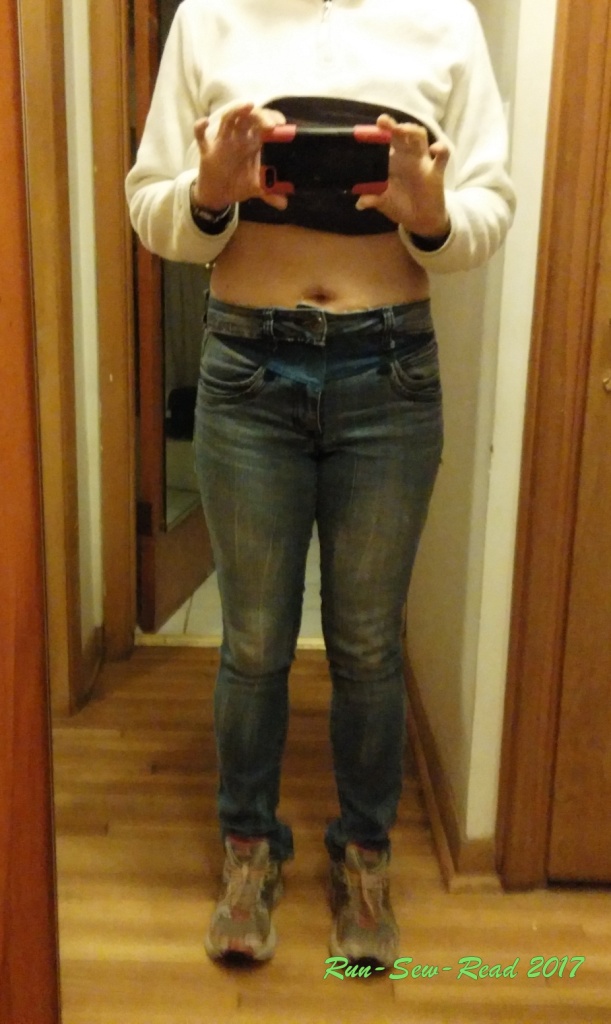 The insert has a slight indented look, for some reason that I haven’t tried to figure out.  I don’t care.  The waistband feels great.

Back in early April, I wrote that a change was coming to my household routine.  And now the details:  On April Fools Day, I cancelled my weekly residential curbside garbage service, and replaced it with a DIY recycle routine.  Before the switch, I spent several weeks considering:

Then I decided to give the recycle routine a 3-month trial period.  I began taking all of my paper, glass, metal, and most plastics to the local recycle center.  Yard clippings got mulched and/or composted.  I was already composting food waste.

The Verdict:  This isn’t foolish; it’s awesome!  I never want to go back to curbside garbage service.  I feel good about recycling and being more aware of buying non-recyclable stuff.  Correction:  I feel great about it.  I save a little bit of money, but that’s not even the biggest benefit.  The routine is better and easier.  Honest!

The recycle center is less than a mile from my house, and is open 3 days a week.  Gone is the problem of being away on garbage day, or forgetting to put the bin out at the curb. 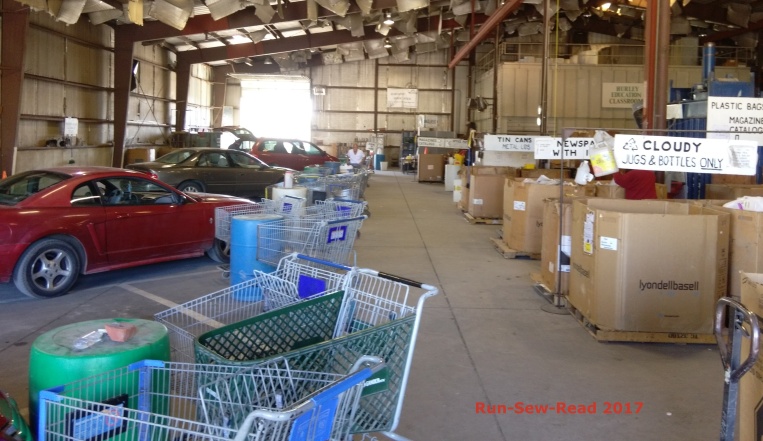 About that curbside garbage bin:  I no longer have the big, ugly, dirty garbage service bin in my yard.  Instead, I have three small baskets under a kitchen cabinet, for paper, plastic and ‘other’.  The ‘other’ basket holds cans, foil and glass. 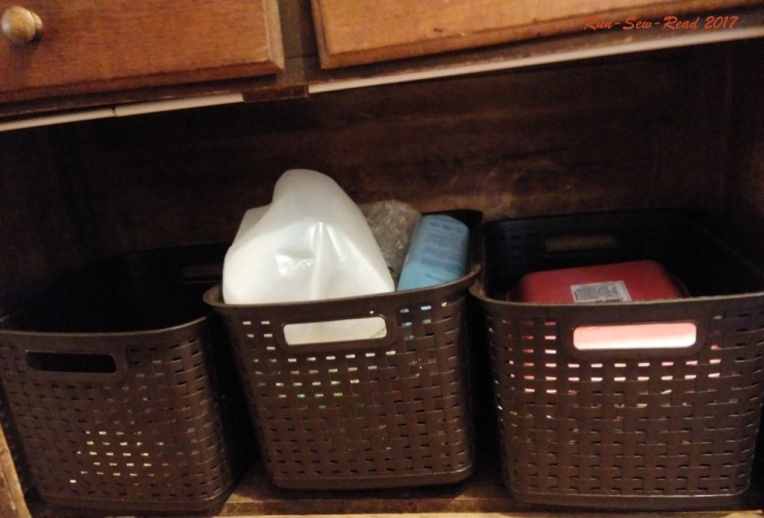 The biggest volume of my weekly curbside garbage was weeds and bush trimmings.  Those now get mulched and/or composted, thanks in part to the little chipper-shredder I bought with the initial savings from the cancelled garbage service. 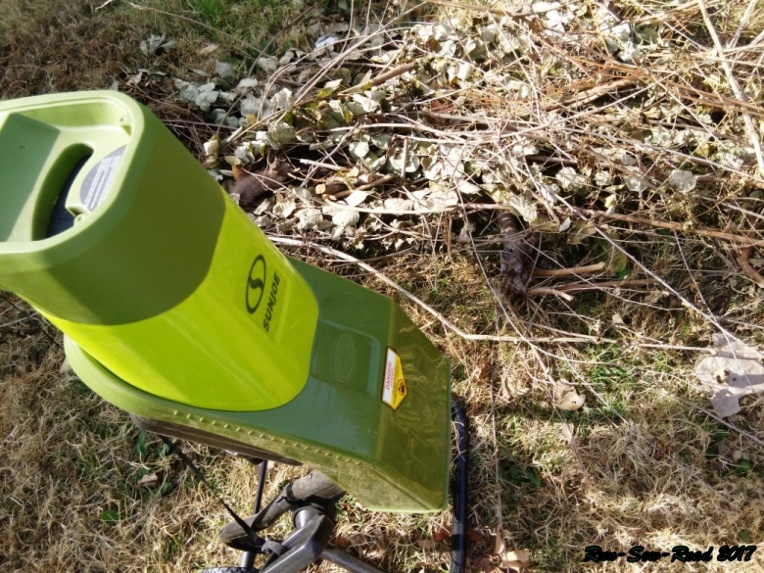 There are some items the recycle center won’t take, such as Styrofoam and cheese wrappers.  I seldom get styrofoam packaging, and I don’t consume a lot of cheese.  When I do have a cheese wrapper, I take it with me on my next trip to the grocery store, and put it in the garbage can at the store entrance.  In other words, I take it back to the place where I bought it.  Is that ethical?  I’m still contemplating that.  I store other non-recyclables out of the way in my shed, for taking to the landfill.  I’ve only had to make one trip to the landfill so far, and had a free coupon for it.

Has this new recycle routine changed how I shop?  Yes, a little bit.  For instance, recently, I was trying to choose between two brands of whole wheat flour; each the same price.  Then I noticed that one was in a paper package, but the other in non-recyclable, cheese-wrapper-type plastic.  So, aha, I chose the paper package.

How good do I feel about my recycle routine?  The recycle center reminds me at the end of every visit. 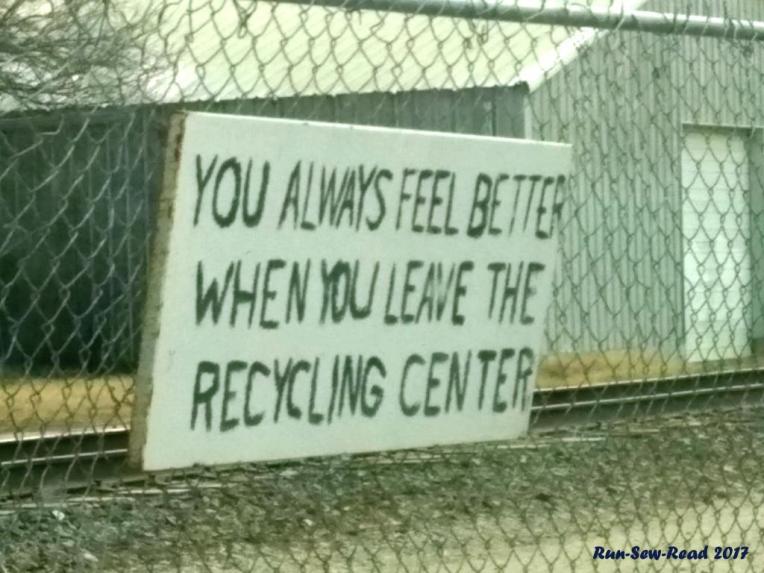