Though I’m only halfway through this book, I’m ready to write my thoughts.  Maybe I’ll finish the book, and maybe there will be a ‘Part 2’ of my review.  But it’s just as likely that I won’t have anything further to say about it. 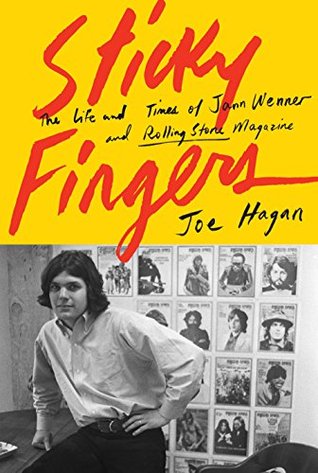 Great job by the writer, Joe Hagan, on detailing the life of Jann Wenner, the long-time head of Rolling Stone magazine.  Hagan held his nose and dug deep, aired out the smoke and weeded through the hype and delusions to reveal the actual person.  How the book came to be is almost a part of the story now:  Hagan was selected by Wenner to do his biography.  Hagan was given access to Wenner’s lifetime of files and writings, and had Wenner’s blessing to talk to anyone in Wenner’s past.  (Well, except the things I found out when reading that he didn’t consent to.)  Then, when Wenner didn’t like the book because it made him look bad, he withdrew his support for the book…which no doubt has added to the book’s intrigue.  “Well played,” I say as I roll my eyes.

Wenner comes across from his earliest years, as a cheater, user, backstabber and bully; and at the same time impulsive and pitiful.  I don’t want to retell stories that you can read in the book, so here is my general characterization of Wenner:

Think of a person who doesn’t bring a dish to a potluck dinner, then goes through the line first, and takes big helpings of the best food, and then doesn’t eat it all, criticizes the cooks, and knows no one will call him out for any of it.  Then he’ll do the same thing at the next potluck dinner, and the next.  While those around him graciously refrain from confronting him about his unacceptable behavior, he has moved on and is pronouncing himself to be a food critic, and invites the biggest names in gourmet cooking to cook for him in return for feedback and ‘promotion’.  Hungry for publicity, the cooks play along with him, when the whole time he’s driven not by the professional he’s held himself out to be, but by his fan boy desires for selfies with celebrities.  It’s pure absurdity.

We needed something better than what Rolling Stone magazine was from the start.  It was a publication that filled a void and for that reason, couldn’t fail.  Willing investors could always be found when Wenner’s reckless spending caused instability; which was a continuous state of affairs.  It didn’t hurt the bottom line that the writers and staff often weren’t paid as promised.  Wenner hired many people who were beginners, or were down and out, and not in a position to hold him accountable when he failed to make good on promises,…like pay for work done.  The magazine’s identity and credibility were doomed from the start, in the hands of an impulsive druggie fan boy.  From the start, he doctored articles and reviews to suit his desire to hurt or help friends and associates.  By maintaining its place in that generation’s music culture, the magazine occupied turf that could have otherwise been held by a legitimate publication that observes certain standards of journalism.

Music fans and music artists also should have something more legitimate than what the Rock and Roll Hall of Fame was when he controlled it.  Here I’m resisting the urge to rant further about the damage done to this institution, because honestly, rock and roll at its most basic is anti-institutionalization and anti-establishment.  Just because someone latched onto a tourism business opportunity and borrowed the rock and roll label, doesn’t make it rock and roll, or a hall of fame.

By the way, ‘Jann’ isn’t his real name.  His parents named him Jan.  He added the extra ‘n’ to appear cool.

I appreciated reading the professional critics’ reviews of the book on the Amazon page, almost as much as the book itself.  And there are a lot of reviews quoted there.  Lots of critics wanted their say about this book, or the subject.  For some reason, the book empowered journalists and critics to come out and say what they really think about the guy.  I guess I’d ask each of them why they felt the need to wait until now.  This biographer did excellent work; with a pitiful subject.

Where to find the book:

Things look brighter from here:  I’ve just been notified by the library that my reserved copy of “Thanks a Lot Mr. Kibblewhite: My Story” by Roger Daltrey is now available for checkout.

So that is my incentive to finish up with Sticky Fingers.